Even you are not pregnant, your body is going through cycles all the time. Your bain and ovaries constantly release and respond to hormone level changes. Your menstrual cycle is controlled by hormones. At the early stage of every cycle, several ovarian follicles develop, and one gradually becomes the dominant follicle. This follicle then releases a mature egg in a process called ovulation, down to the fallopian tube to the uterus. If the egg meets the sperm along the way, the union results in a fertilized egg, initiating prenatal development. If the egg is not fertilized, uterine lining and blood are shed, which leads to your next period.

Your reproductive system is regulated by two hormones produced by the frontal part of the pituitary gland in your brain.

The first one is the follicle-stimulating hormone or FSH, which stimulates the growth of many follicles. The other is the luteinizing hormone or LH, which triggers ovulation.

These two hormones travel down to the ovaries where levels of estrogen and progesterone are regulated. The hormone estrogen is responsible for secondary female characteristics and rises 4-5 days before ovulation. Progesterone level goes up after ovulation, preparing the body for implantation.

Your menstrual cycle starts with the follicular phase. This phase starts on the first day of your period and lasts until the day of ovulation. It ranges from 7-40 days and the length varies from woman to woman.

Everything starts with the hypothalamus in your brain. It produces a hormone called the gonadotropin-releasing hormone (GnRH). GnRH triggers your pituitary gland to release hormone FSH, which stimulates the growth of many eggs.

FSH then travels with your bloodstream to the ovaries. Upon its arrival, a dominant follicle is developed into a mature egg.

During its development, this dominant follicle starts to produce the hormone estrogen. Estrogen often starts to rise about 4-5 days before ovulation and reaches its peak approximately one day before ovulation. If you have a 28-day cycle, this is usually about day 13.

Just like testosterone to men, estrogen is one of the most important hormones to women. It has a lot to do with women’s health in general, such as ovulation, bone health, skin condition, and mood stability.

During the follicular phase, you should feel the best while your best is preparing for ovulation. The increased level of the hormone estrogen gives you elastic skin and a great mood.

The estrogen peak tells the brain an egg is mature. The brain then releases the luteinizing hormone or LH, which informs the ovarian follicle to release the egg into the fallopian tube. This process is ovulation. The empty follicle left behind the egg is called corpus luteum.

You reach your peak fertility around this time. It is often believed that ovulation happens on day 14 of a cycle, but this is more like a myth than truth. Ovulation time and hormone levels differ hugely from woman to woman and cycle to cycle. Your OBGYN doctor often orders a blood test to check your actual hormone concentration to determine when you ovulate. Mira is an easy-to-use fertility tracker that tracks your actual hormone concentrations at home. So you can see your unique hormone curve without the hassle of multiple trips to the hospital.

Ovulation often happens 12-24 hours after the LH surge. After the egg is released, it has only up to 24 hours of life span to be fertilized by the sperm. Your chance of pregnancy is zero on the day after ovulation. You have your peak fertility between the LH surge and the day of ovulation.

The good news is that sperm can survive inside women’s reproductive tract up to 5 days with the help of fertile mucus. So you are fertile during the 5 days leading to ovulation as well. Testing your estrogen level together with the LH is a good method to find your fertile days because it rises about 5 days before ovulation.

If the egg is not fertilized, the corpus luteum will start to shrink. It stops making progesterone and no more hormone supports the uterine line. The shed of the lining leads to your next period.

During the luteal phase, the rising level of progesterone may give you PMS symptoms. You may find problems like tiredness, breakouts, fatigue, and oily skin during this phase. Many women don’t feel well when cycle and hormone levels are not consistent. Check out how Mira helps you to know better about your fertility hormones. 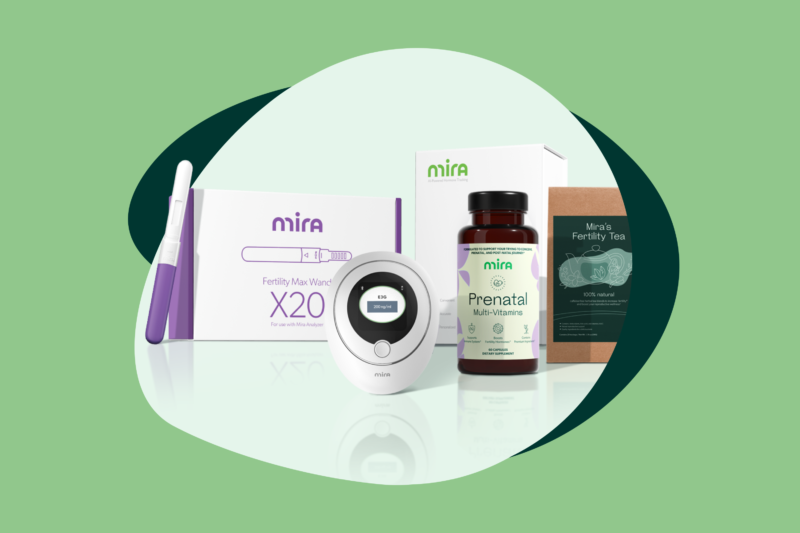