We know that everything comes in its time, but late ovulation can be frustrating if you’re trying to conceive. In this post, we will look at the primary causes of late ovulation and what they can mean for your quest for pregnancy. What is late ovulation?

To understand what late ovulation means for your fertility, let’s refresh our knowledge of the menstrual cycle.

Then follows ovulation, usually lasting only 12-14 hours. During ovulation, the dominant follicle breaks and releases an egg, which exits the ovary and travels through the fallopian tube to the uterus.

During the luteal phase, the follicle closes off and turns into the corpus luteum. This mass of cells grows and produces progesterone, the hormone that makes your uterus ripe and ready for pregnancy, while the egg is on its way to meet the sperm.

If there is no fertilized egg or implantation, there’s no pregnancy. In this case, the uterine lining sheds and menstruation begins. The luteal phase is the time between your ovulation and your next menstrual period.

Remember: all women are unique, and so are their bodies and cycles. Normally, ovulation happens around the middle of your cycle. For women with a standard 28-day cycle, ovulation occurs around day 14.

However, there are many factors that can delay your ovulation. Most of the time, ovulation happening after day 14 is perfectly normal — even if it wasn’t what you were taught in your high school biology class. Ovulation is only considered “late” when it occurs after day 21.

Late ovulation is usually caused by hormonal imbalances, which may be temporary or long-term, depending on the cause.

So, what are the most common reasons for these imbalances?

We’ve all heard that stress is bad for us. But did you know that stress can seriously affect our hormone levels? From the big emotional challenges in life, to the simple things like traveling or accepting a new project at work, any mental up-and-down can affect our bodies immensely. Try to keep this in mind — and go easy on yourself if stress impacts your ovulation while trying to conceive (TTC).

The thyroid is a gland in the front of your neck that produces hormones controlling your metabolism. Your thyroid is closely connected with the pituitary gland, which releases fertility hormones like luteinizing hormone (LH) and follicle stimulating hormone (FSH).

Because the pituitary gland is responsible for these hormones, which are vital to ovulation, having either an underactive (hypothyroidism) or overactive (hyperthyroidism) thyroid can delay the release of an egg.

PCOS is a condition caused by an imbalance of reproductive hormones. Women with PCOS produce too much testosterone, which can hinder normal ovulation. With PCOS, the egg may not develop as it should, or it may not be released during ovulation, resulting in an anovulatory cycle.

PCOS affects 1 out of every 10 women in the United States. Irregular menstrual cycles are one of the main symptoms of PCOS. It is also a common reason for infertility. The good news is that infertility caused by PCOS can be treated with hormone therapy or by tracking your ovulation with a digital fertility tracker like Mira.

Prolactin is the primary hormone responsible for breast milk production. Prolactin prevents menstruation, so while you’re nursing, your periods may stop or become light and irregular. Sometimes, it may prevent or delay ovulation.

However, a lack of menstruation doesn’t always mean a lack of ovulation. Some women assume that they can’t get pregnant while breastfeeding, which is a top reason for surprise pregnancies among nursing mothers! Any medications you take may potentially affect your ovulation. For example, nonsteroidal anti-inflammatory drugs (NSAIDS) like ibuprofen or aspirin can inhibit ovulation. You should always consult your doctor about the potential side effects of your medications if you are TTC.

If you’ve recently stopped taking hormonal birth control, the pill may be the reason for delayed ovulation. It can take up to three months for ovulation to resume after stopping oral contraceptives.

Illicit drug use and smoking are also extremely bad for healthy ovulation, and may prevent you from ovulating on time.

In rare cases, delayed ovulation may imply that you have a short luteal phase.

You can determine phase length by tracking your cycle. Just count the days between ovulation and the first day of your period. That is how long your luteal phase is.

According to the Department of Obstetrics and Gynecology of the University of North Carolina, the luteal phase lasts between 12 and 14 days for most women. Your luteal phase is short if it lasts less than 10 days.

A short luteal phase doesn’t give the uterine lining a chance to grow and develop enough to support a growing baby. As a result, it can be harder to get pregnant or it might take you longer to conceive. Thankfully, LPD is a condition that can be treated. What late (or delayed) ovulation means for pregnancy

If you have been trying to get pregnant for at least a year (or six months if you are age 35 or older), late ovulation may be the cause of your fertility woes.

While irregular ovulation makes it harder to predict your fertile window, it doesn’t mean you won’t get pregnant. It just may be more difficult to pinpoint the date of ovulation.

There are a few methods you can use to determine the time of ovulation:

The average ovulation kit doesn’t offer personalized data about your cycles. They simply use a threshold to detect LH to estimate if you’re ovulating.

To correctly track your cycle and luteal phase, you need individualized feedback. The Mira Fertility Tracker measures actual LH levels in mIU/mL. Other OPKs detect ovulation off a static baseline LH, which can cause many false positives.

With Mira, you can see your actual hormone levels and curve. You can monitor peaks, declines, and menstruation through the app to detect your luteal phase. Unlike other tracking solutions, Mira still allows you to identify your ovulation even if your baseline LH varies.

Tracking fertility hormones with the Mira Fertility Tracker allows you to see your changing hormone patterns and more accurately predict ovulation, which can help you conceive.

If you’re concerned about your fertility or ovulation, it’s always a good idea to see your OB/GYN for a medical evaluation.

Late ovulation may impact your fertility, which can result in disappointing results if you are TTC. It may also be a sign of hormonal imbalance, which can signify a problem with your overall health. Usually, these problems are not serious, but it is important to understand the potential consequences and risks of late ovulation.

What does it mean for your period/cycle?

Late ovulation can make it more difficult to predict your cycle, including when you will ovulate and when your menstrual period will arrive. This can result in challenges when TTC, as well as getting caught off guard by the arrival of your period!

Predicting your cycle when your ovulation is delayed or late is more difficult, but it is not impossible. Traditional OPKs do not offer the kind of personalized analysis needed to predict ovulation and menstruation in people with irregular cycles. However, the latest in fertility tracking technology — like Mira — can measure the numeric levels of fertility hormones in your urine to give you the most accurate and sophisticated predictions available when it comes to your menstrual cycle.

What does it mean for pregnancy tests?

When you are TTC, you should time sexual intercourse with your fertile window (the five days before and the day of ovulation) to maximize your odds of getting pregnant. If your ovulation is late or irregular, you may find it more difficult to determine when you should have sex for the best chances of conception.

As a result, you may get more negative pregnancy tests. When late ovulation signals the late arrival of your period, you may also be tempted to test too early in order to accurately measure the presence of pregnancy hormones in your urine.

Home pregnancy tests work by measuring the amount of human chorionic gonadotropin (HCG) in your urine. HCG levels rise steadily throughout pregnancy to tell your body to prepare the uterus for the growth of a fetus.

For the most accurate results, you should use a home pregnancy test no earlier than the first day of your expected period. However, if you expect your period to arrive late, you may find the “two-week wait” after ovulation unbearable. This can tempt you to test too early, which means you may get a false-negative result (more on how to interpret results like evap lines here).

What does it mean for miscarriages?

No evidence exists to support the idea that late ovulation can cause miscarriage. However, there is some evidence to suggest that late implantation, occuring more than 8 to 10 days after ovulation, may increase your odds of miscarriage.

In order for pregnancy to occur, an egg must be fertilized after ovulation. When sperm meets the egg in the uterus, fertilization happens, followed by implantation. During implantation, the fertilized egg implants itself into the lining of the uterus (the endometrium).

How late is too late and when should you see a doctor?

It’s important to remember that getting pregnant can take a long time. While the wait is frustrating, it is still perfectly normal!

If you have no additional health concerns, you should try to get pregnant for at least one year (or six months if you are older than 35) before visiting a fertility specialist. However, you should see a doctor earlier if you have a preexisting health condition that could affect fertility (think: PCOS or endometriosis), if you suspect your medications may be impacting your fertility, or if you have any unusual symptoms.

Abnormal bleeding that lasts several hours, excruciating abdominal pain during periods, or menstrual cycles that are longer than 35 days or shorter than 21 days may be a sign that something is up with your fertility. You should also see a doctor if you have not had a period in 90 days. This can be a sign of pregnancy, or a sign of another health condition. Yes, You Can Get Pregnant While Breastfeeding – Here’s What to Know 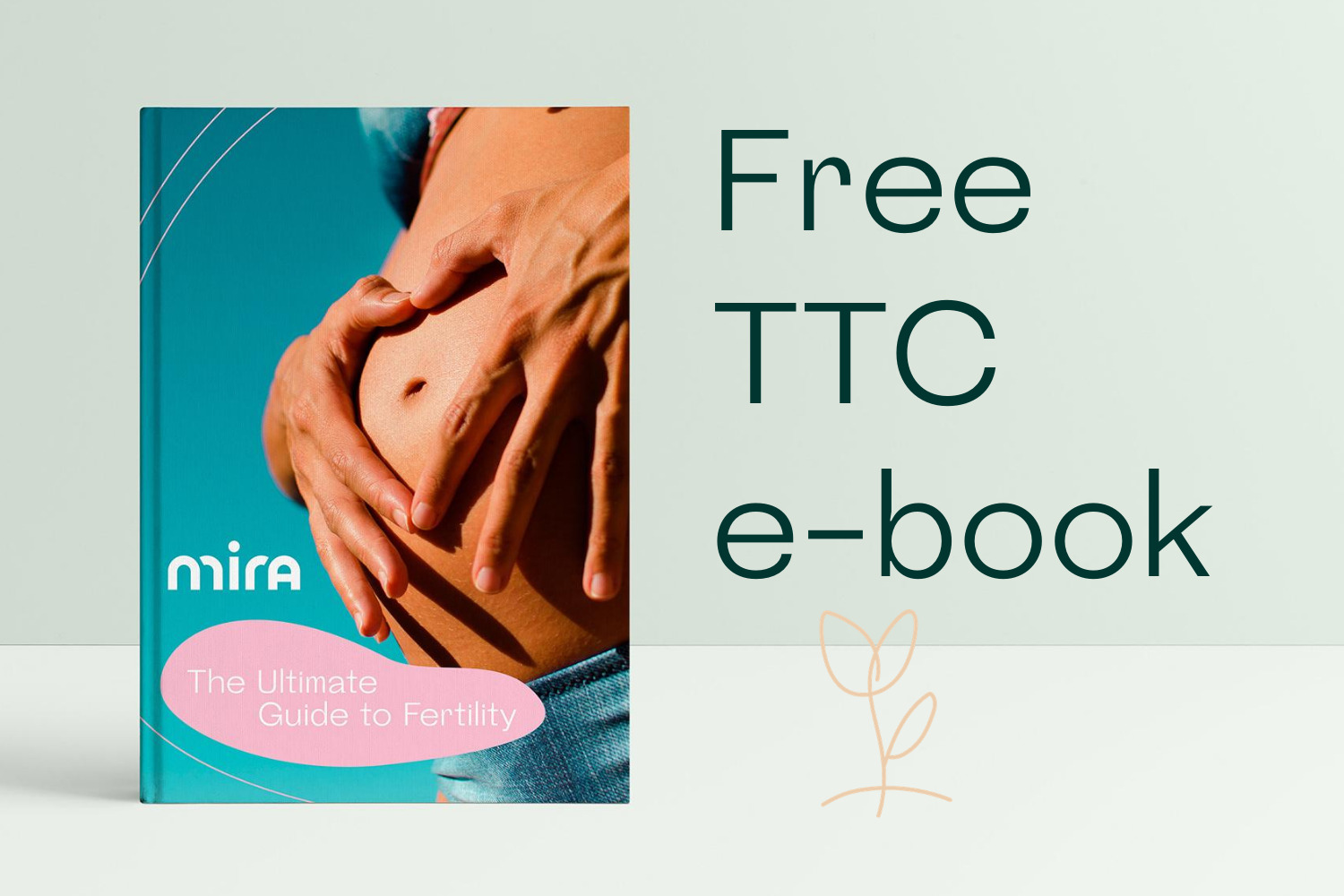 Mira vs OPKs: Which is Right For You?